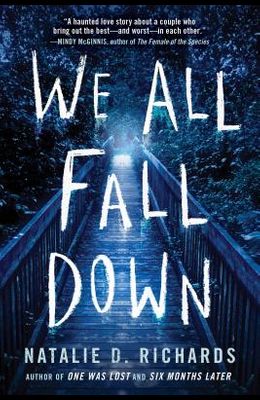 We All Fall Down

A new romantic thriller--with a dash of horror--from Natalie D. Richards, the bestselling author of YA psychological thriller books. Theo's always been impulsive. But telling Paige how he feels? He's obsessed over that decision. And it's time. Tonight. At the party on the riverbank, under the old walking bridge, site of so many tales of love and death. Paige has had a crush on Theo since they first met, but she knows her feelings are one-sided. She's trying to move on, to flirt. A party at the river is just what she needs. Except a fight breaks out, and when Paige tries to intervene--Theo's fist lands in her face. All Theo and Paige want to do is forget that fateful night. But strange events keep drawing them back to the bridge. Someone, something is determined to make them remember...and pay for what they each did. Perfect for readers who want: YA mental health stories Characters with ADHD in YA Edge-of-your-seat reads Praise for Natalie D. Richards: As addictive as it is unpredictable. Natalie will keep you second guessing until the nail-biting end.--NATASHA PRESTON, New York Times bestselling author of The Cabin on My Secret to Tell Brimming with suspense and intrigue.--MEGAN MIRANDA, New York Times bestselling author of All the Missing Girls on My Secret to Tell Also by Natalie D. Richards: Five Total Strangers Six Months Later Gone Too Far My Secret to Tell One Was Lost What You Hide