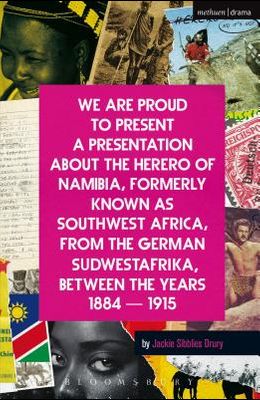 We Are Proud to Present a Presentation about the Herero of Namibia, Formerly Known as Southwest Africa, from the German Sudwestafrika, Between the Yea

I'm not doing a German accent You aren't doing an African accent We aren't doing accents A group of actors gather to tell the little-known story of the first genocide of the twentieth century. As the full force of a horrific past crashes into the good intentions of the present, what seemed a far-away place and time is suddenly all too close to home. Just whose story are they telling? Award-winning playwright Jackie Sibblies Drury collides the political with the personal in a play that is irreverently funny and seriously brave. We Are Proud To Present . . . received its European premiere at the Bush Theatre, London, on 28 February 2014.