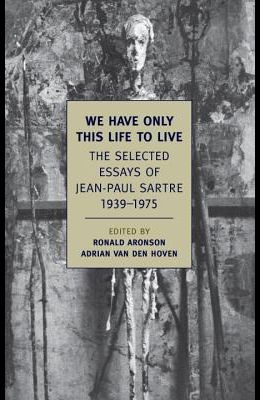 Jean-Paul Sartre was a man of staggering gifts, whose accomplishments as philosopher, novelist, playwright, biographer, and activist still command attention and inspire debate. Sartre's restless intelligence may have found its most characteristic outlet in the open-ended form of the essay. For Sartre the essay was an essentially dramatic form, the record of an encounter, the framing of a choice. Whether writing about literature, art, politics, or his own life, he seizes our attention and drives us to grapple with the living issues that are at stake. We Have Only This Life to Live is the first gathering of Sartre's essays in English to draw on all ten volumes of Situations , the title under which Sartre collected his essays during his life, while also featuring previously uncollected work, including the reports Sartre filed during his 1945 trip to America. Here Sartre writes about Faulkner, Bataille, Giacometti, Fanon, the liberation of France, torture in Algeria, existentialism and Marxism, friends lost and found, and much else. We Have Only This Life to Live provides an indispensable, panoramic view of the world of Jean-Paul Sartre.

Books similiar to We Have Only This Life to Live: The Selected Essays of Jean-Paul Sartre, 1939-1975

List of All Editions of We Have Only This Life to Live: The Selected Essays of Jean-Paul Sartre, 1939-1975