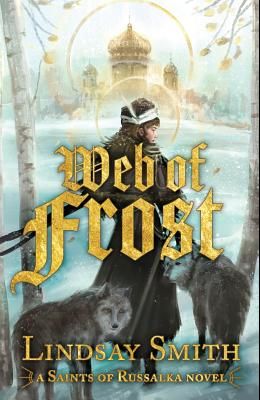 Book #1 in the Saints of Russalka Series
by
Lindsay Smith

A too-young queen. An empire on the brink. And the alluring, dark prophet who could save her... or destroy everything. Russalka is a proud empire, frozen and vast, protected for centuries by a royal family who works miracles from the saints. But rebellion stirs in the streets, and its war-hungry neighbors threaten to invade. The young princess Katza has been tormented by visions of her bloodied hands destroying Russalka--a clear message from the saints that she must never rule. So when tragedy places her next in line to the throne, Katza fears their warnings are on the verge of coming true. Then she meets Ravin, a mysterious young prophet with visions of his own: visions of Katza as a regal empress with unimaginable power. All she has to do seize upon the holy magic of her bloodline. But the more Ravin whispers in her ear, the more Katza begins to wonder whether he has her best interests at heart. With a revolution boiling over and war looming at the border, the greatest threat to Russalka may be Katza herself.

Saints of Russalka Series In Order - By Lindsay Smith