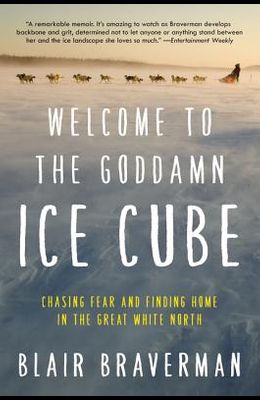 Welcome to the Goddamn Ice Cube: Chasing Fear and Finding Home in the Great White North

A rich and revelatory memoir of a young woman confronting her fears and finding home in the North. Blair Braverman fell in love with the North at an early age: By the time she was nineteen, she had left her home in California, moved to Norway to learn how to drive sled dogs, and worked as a tour guide on a glacier in Alaska. By turns funny and sobering, bold and tender, Welcome to the Goddamn Ice Cube charts Blair's endeavor to become a -tough girl---someone who courts danger in an attempt to become fearless. As she ventures into a ruthless arctic landscape, Blair faces down physical exhaustion--being buried alive in an ice cave, and driving a dogsled across the tundra through a whiteout blizzard in order to avoid corrupt police--and grapples with both love and violence as she negotiates the complex demands of being a young woman in a man's land. Brilliantly original and bracingly honest, Welcome to the Goddamn Ice Cube captures the triumphs and the perils of the journey to self-discovery and independence in a landscape that is as beautiful as it is unforgiving.

From the Back Cover By the time Blair Braverman was eighteen, she had left her home in California, moved to arctic Norway to learn to drive sled dogs, and found work as a tour guide on a glacier in Alaska. Determined to carve out a life as a tough girl--a young woman who confronts danger without apology--she slowly developed the strength and resilience that the North demanded of her. Weaving together fast-paced adventure writing, ethnographic journalism, and elegantly wrought reflections on identity, Welcome to the Goddamn Ice Cube captures the triumphs and the perils of Braverman's journey to self-discovery and independence in a landscape as beautiful as it is unforgiving.