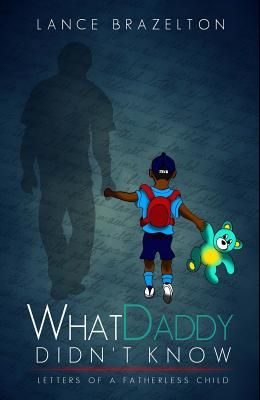 What Daddy Didn't Know: Letters of a Fatherless Child

What Daddy Didn't Know ( Letters of a Fatherless Child ) is an autobiography by Lance Brazelton, a twenty one-year-old African American with a passion for expression through art. The story shows how he overcame the challenges of growing up without his father actively in his life, and how he overcome his childhood trauma while on the verge of becoming a statistic. His childhood challenges are told through letters written during different stages of his life, and they're addressed to the one person who never knew his struggle; his father. These letters reveal the thought process of fatherless children, and illustrate how decisions are most important in your adolescent years. According to the United States Census Bureau, 24 million children in America live in biological father-absent homes. And it's statistically proven that fatherless children are at a higher risk of dropping out of high school, committing crimes, running away from home, drug abuse, suicide, teen pregnancy, incarceration, and the list goes on. The audience for this book ranges from teens (boys/ girls), to single parents playing both roles of guardianship, soon to be fathers, as well as fortunate fathers who have their children under the same roof as them; to encourage them to remain present in their child's life; and never leaving their seed unattended. Everything Brazelton expresses in these letters from his dreams and aspirations, to his accomplishments and failures, down to his emotions and the impalement of his pain; it was all something his father never knew, but, it was something his Heavenly Father gave him the strength to endure. Click Here to visit official website.

List of All Editions of What Daddy Didn't Know: Letters of a Fatherless Child