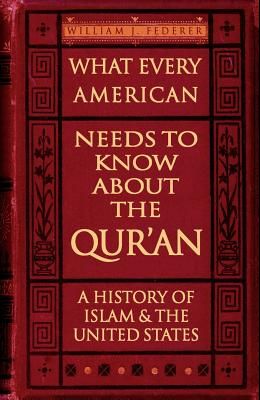 What Every American Needs to Know about the Qur'an: A History of Islam & the United States

WHAT EVERY AMERICAN NEEDS TO KNOW ABOUT THE QUR'AN - A HISTORY OF ISLAM & THE UNITED STATES You will be fascinated by this fast-paced, objective history of the world from a perspective you have never imagined. Current events will come into focus in the back drop of 1,400 years of inconceivable yet true events and conflicts. Thousands of books, documents and articles have been researched over several years in preparation for this book. In 2006, Keith Ellison became the first Muslim elected to the United States Congress. He swore in on a Qur'an. Most Americans know little about the Qur'an, who wrote it and how Islam spread. Within 100 years of Mohammed's death, his followers conquered North Africa, the Holy Land, Persia, Spain - from the Indian Ocean to the Atlantic Ocean. President Barak Obama stated in Cairo, Egypt, June 4, 2009: Islam has always been a part of America's story. Indeed, Islam has affected the Western World for 1,400 years, from 622 AD to today's headlines. This book will give you a fascinating glimpse into captivating events and amazing stories- you won't want to put it down Find answers to how Islam is connected to: - The stirrup for riding horses, who invented it and how Muslims used it to win military conquests? - Santa Claus - how Islam caused the story of Saint Nicholas to spread from the Byzantine Empire to Western Europe in 1087 AD? -How did Muslim Ottoman Turks invading the Byzantine Empire resulted in the Crusades, 1095-1272 AD? - What did Marco Polo say was the origin of the word assassin? - What happened to the Seven Churches of mentioned in the Book of Revelation? - How did the 1000 year old Byzantine Enpire get conquered? - What did Sultan Mehmet II do to Constantinople in 1453 that led Columbus to set sail in 1492? - Dracula - What is the real-life account of Vlad the Impaler in 1462, (not Bram Stoker's 1897 fiction novel)? - What did Martin Luther say in 1529 about Muslim Turkish Sultan Suleiman the Magnificent who was laying siege to Vienna, Austria? - Who did Captain John Smith fight in Hungary in 1600 before founding Virginia in 1607? - Who did James Oglethorpe fight in Serbia in 1717 before founding the Colony of Georgia? - What happened to a Pilgrim ship returning to England to trade for supplies in 1625 when they met a Moroccon pirate man-of-war? - September 11, 1683 - How the Muslims loss in the Battle of Vienna lead to coffee and croissant pastries spreading across Europe? - How was Islamic expansion funded by the slave trade of millions Africans and Europeans? - How did Thomas Jefferson and James Madison's fighting the North African Barbary Pirates, 1805-1815, lead to the U.S. Marine nickname leathernecks, ' Marine mamluke sword, Marine Anthem From the halls of Montezuma to the Shores of Tripoli? - What happened to over 1.5 million Armenian Christians when President Woodrow Wilson failed to convince the U.S. Senate in 1922 to adopt Armenia as a protectorate - similar to Puerto Rico? - What was the impact of oil being discovered in Saudi Arabia in 1938? You will not be the same after you have learned What Every American Needs to Know about the Qur'an. (288 pages, paperback)