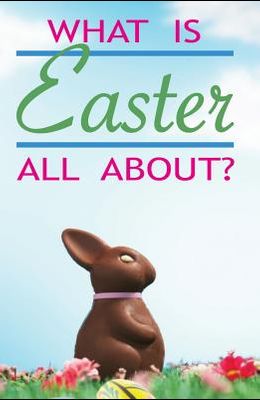 People often get confused over the real meaning of Easter. Store shelves are crammed with row after row of Easter baskets, egg coloring kits, jelly beans and chocolate bunnies. But the real meaning of Easter goes way beyond such colorful, tasty fun. It's about someone who died, and then found new life. Jesus Christ is the most central figure in all of human history, and Easter is all about his death and resurrection. Here is what the Bible says about who He is...what He went through on our behalf...and why. THE PAIN The soldiers took charge of Jesus. Carrying His own cross, He went out to The Place of the Skull (which in Aramaic is called Golgotha). Here they crucified Him, and with Him two others--one on each side and Jesus in the middle. Jesus said, Father, forgive them, for they do not know what they are doing. And they divided up His clothes by casting lots. Pilate had a notice prepared and fastened to the cross. It read: JESUS OF NAZARETH, THE KING OF THE JEWS. THE PAYMENT The people stood watching, and the rulers even sneered at Him. They said, He saved others; let Him save Himself if He is the Christ of God, the Chosen One. One of the criminals who hung there hurled insults at Him: Aren't You the Christ? Save Yourself and us But the other criminal rebuked him. Don't you fear God, he asked, since you are under the same sentence? We are punished justly, for we are getting what our deeds deserve. But this man has done nothing wrong. Then he said, Jesus, remember me when You come into Your kingdom. Jesus answered him, I tell you the truth, today you will be with Me in paradise. We all, like sheep, have gone astray, each of us has turned to his own way; and the Lord has laid on Him the iniquity of us all. From the sixth hour until the ninth hour darkness came over all the land. About the ninth hour Jesus cried out in a loud voice, Eloi, Eloi, lama sabachthani?--which means, My God, My God, why have You forsaken Me? And when Jesus had cried out again in a loud voice, He gave up His spirit. At that moment the curtain of the temple was torn in two from top to bottom. The earth shook and the rocks split. When the centurion and those with him who were guarding Jesus saw the earthquake and all that had happened, they were terrified, and exclaimed, Surely He was the Son of God THE PROOF Now there was a man named Joseph, a member of the Council, a good and upright man, who had not consented to their decision and action. Going to Pilate, he asked for Jesus' body. Then he took it down, wrapped it in linen cloth and placed it in a tomb cut in the rock, one in which no one had yet been laid. It was Preparation Day, and the Sabbath was about to begin. After the Sabbath, at dawn on the first day of the week, Mary Magdalene and the other Mary went to look at the tomb. There was a violent earthquake, for an angel of the Lord came down from heaven and, going to the tomb, rolled back the stone and sat on it. His appearance was like lightning, and his clothes were white as snow. The guards were so afraid of him that they shook and became like dead men. The angel said to the women, Do not be afraid, for I know that you are looking for Jesus, who was crucified. He is not here; He has risen, just as He said. Come and see the place where He lay. Then go quickly and tell His disciples: 'He has risen from the dead and is going ahead of you into Galilee. There you will see Him.' Now I have told you. So the women hurried away from the tomb, afraid yet filled with joy, and ran to tell His disciples. Suddenly Jesus met them. Greetings, He said. They came to Him, clasped His feet and worshiped Him. Then Jesus said to them, Do not be afraid. Go and tell My brothers to go to Galilee; there they will see Me. THE PROMISE One of those who saw the resurrected Christ, the Apostle Peter, says concerning Him, We are witnesses of everything He did...He commanded us to preach to the people and to testify that He is the One whom God appointed as judge of the living and the dead. All the prophets testify about Him that everyone who believes in Him receives forgiveness of sins through His name. And Jesus Christ who died and rose again for us promised, My Father's will is that everyone who looks to the Son and believes in Him shall have eternal life, and I will raise him up at the last day. THE PRIVILEGE He Jesus Christ] died for all, that those who live should no longer live for themselves but for Him who died for them and was raised again. Bible references: Isaiah 53:7; John 19:16b-18; Luke 23:34; John 19:19; Luke 23:35,39-43; Isaiah 53:6; Matthew 27:45,46,50, 51,54; Luke 23:50,51a,52-54; Matthew 28:1-10; Acts 10:39a,42,43; John 6:40; 2 Corinthians 5:15.