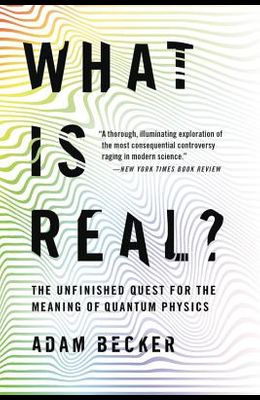 What Is Real?: The Unfinished Quest for the Meaning of Quantum Physics

A thorough, illuminating exploration of the most consequential controversy raging in modern science. -- New York Times Book Review An Editor's Choice, New York Times Book Review Longlisted for PEN/E.O. Wilson Prize for Literary Science Writing Longlisted for Goodreads Choice Award Every physicist agrees quantum mechanics is among humanity's finest scientific achievements. But ask what it means, and the result will be a brawl. For a century, most physicists have followed Niels Bohr's solipsistic and poorly reasoned Copenhagen interpretation. Indeed, questioning it has long meant professional ruin, yet some daring physicists, such as John Bell, David Bohm, and Hugh Everett, persisted in seeking the true meaning of quantum mechanics. What Is Real? is the gripping story of this battle of ideas and the courageous scientists who dared to stand up for truth. An excellent, accessible account. -- Wall Street Journal Splendid. . . . Deeply detailed research, accompanied by charming anecdotes about the scientists. -- Washington Post

Books similiar to What Is Real?: The Unfinished Quest for the Meaning of Quantum Physics

List of All Editions of What Is Real?: The Unfinished Quest for the Meaning of Quantum Physics