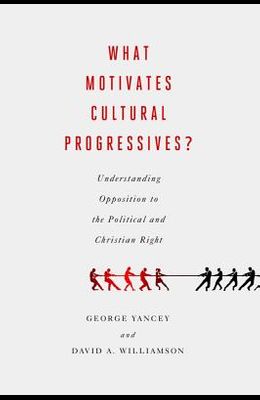 What Motivates Cultural Progressives?: Understanding Opposition to the Political and Christian Right

by
George Yancey and David A Williamson

Public activism has grown significantly during the 21st century as a cornerstone of the democratic process. But activism, regardless of its ideological roots, is often interpreted through the lens of the culture wars&#8213;pitting social movements with opposing ideals against one another. For too long, as George Yancey and David Williamson argue, progressive activists, one side of these culture wars, have been seldom studied and virtually never critiqued in public conversation. Yancey and Williamson describe and analyze the multifaceted cultural progressive movement and its place within the larger American society. What they uncover is a collective identity informed by staunch opposition to cultural conservatives&#8213;both political and religious&#8213;that is motivated by the progressive activist's preference for absolute rationality. Further, Yancey and Williamson argue that, despite great resistance to conservatives purportedly nonrational appeals, progressive activists are found to use irrational techniques when seeking to establish their movement and position their cause as socially legitimate. In the contemporary heated political climate the often-surprising and likely controversial findings of What Motivates Cultural Progressives? will prove essential, thought-provoking reading for understanding the growing concern over the influence of activism.