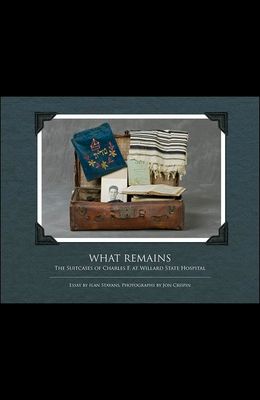 What Remains: The Suitcases of Charles F. at Willard State Hospital

by
and Ilan Stavans and Jon Crispin
$26.95
Select Format

After the closure of Willard Psychiatric Center on New York's Seneca Lake in 1995, more than four hundred abandoned suitcases were discovered in its attic, containing thousands of personal possessions belonging to former patients. Three of the suitcases were owned by Charles F., an eighty-four-year-old Russian Jewish immigrant arrested at a Brooklyn subway station in 1946 and institutionalized at Willard State Hospital (as it was then known). An extraordinary collaboration between image and text, What Remains pairs Jon Crispin's gripping photographs of Charles's belongings with Ilan Stavans's intriguing, speculative portrait of a patient and institution at odds with one another. Anxious, isolated, and senile, Charles strikes an unexpected friendship with a young doctor whose empathy accompanies him through a sudden spiritual awakening. As the narrative unfolds, it becomes clear that Stavans, himself an immigrant from Mexico whose family history is marked by bouts of mental illness, approaches his character as a surrogate of his own personal journey. Crispin's photographs of Charles's possessions--including clothing, household tools, and Jewish ritual objects--are haunting in their ability to compel the reader to imagine a distant man's life. A moving blend of fact and fiction, photography and prose, What Remains reflects on questions of mental health, spirituality, and the Jewish immigrant experience in midcentury America.

List of All Editions of What Remains: The Suitcases of Charles F. at Willard State Hospital