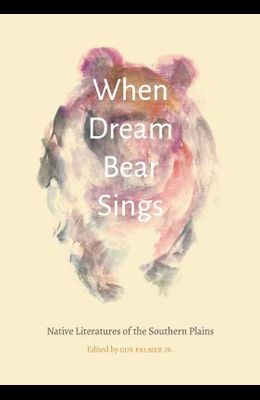 When Dream Bear Sings: Native Literatures of the Southern Plains

Although the canon of nineteenth-century Native American writers represents rich literary expression, it derives generally from a New England perspective. Equally rich and rare poetry, songs, and storytelling were produced farther west by Indians residing on the Southern Plains. When Dream Bear Sings is a multidisciplinary, diversified, multicultural anthology that includes English translations accompanied by analytic and interpretive text outlines by leading scholars of eight major language groups of the Southern Plains: Iroquoian, Uto-Aztecan, Caddoan, Siouan, Algonquian, Kiowa-Tanoan, Athabaskan, and Tonkawa. These indigenous language families represent Indian nations and tribal groups across the Southern Plains of the United States, many of whom were exiled from their homelands east of the Mississippi River to settlements in Kansas and Oklahoma by the Indian Removal Act of the 1830s. Although indigenous culture groups on the Southern Plains are complex and diverse, their character traits are easily identifiable in the stories of their oral traditions, and some of the most creative and unique expressions of the human experience in the Americas appear in this book. Gus Palmer Jr. brings together a volume that not only updates old narratives but also enhances knowledge of indigenous culture through a modern generation's familiarity with new, evolving theories and methodologies regarding verbal art performance.