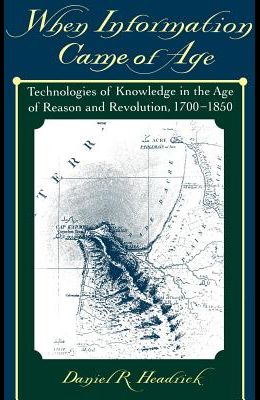 When Information Came of Age: Technologies of Knowledge in the Age of Reason and Revolution, 1700-1850

Although the Information Age is often described as a new era, a cultural leap springing directly from the invention of modern computers, it is simply the latest step in a long cultural process. Its conceptual roots stretch back to the profound changes that occurred during the Age of Reason and Revolution. When Information Came of Age argues that the key to the present era lies in understanding the systems developed in the eighteenth and early nineteenth centuries to gather, store, transform, display, and communicate information. The book provides a concise and readable survey of the many conceptual developments between 1700 and 1850 and draws connections to leading technologies of today. It documents three breakthroughs in information systems that date to the period: the classification and nomenclature of Linnaeus, the chemical system devised by Lavoisier, and the metric system. It shows how eighteenth-century political arithmeticians and demographers pioneered statistics and graphs as a means for presenting data succinctly and visually. It describes the transformation of cartography from art to science as it incorporated new methods for determining longitude at sea and new data on the measure the arc of the meridian on land. Finally, it looks at the early steps in codifying and transmitting information, including the development of dictionaries, the invention of semaphore telegraphs and naval flag signaling, and the conceptual changes in the use and purpose of postal services. When Information Came of Age shows that like the roots of democracy and industrialization, the foundations of the Information Age were built in the eighteenth and early nineteenth century.