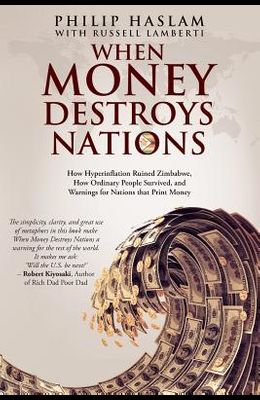 When Money Destroys Nations: How Hyperinflation Ruined Zimbabwe, How Ordinary People Survived, and Warnings for Nations that Print Money

by
Philip Haslam and Russell Lamberti

Since the global financial crisis of 2008, the major governments of the world have resorted to printing vast sums of money to pay national debts and bail out banks. The warning signs are clear, and the collapse of the Zimbabwean dollar in 2009 after years of rampant money printing is a frightening example of what lies in store for the world's economies if painful, but necessary, reform is not enacted soon. When Money Destroys Nations tells the gripping story of the disintegration of the once-thriving Zimbabwean economy and how ordinary people survived in turbulent circumstances. Analysing this case within a global context, Philip Haslam and Russell Lamberti investigate the causes of hyperinflation and draw ominous parallels between Zimbabwe and the world's developed economies. The looming currency crises and possible hyperinflation in these major economies, particularly the United States, have the potential to turn the current world order upside down. Zimbabwe's lessons must not be ignored. This is the story of When Money Destroys Nations.