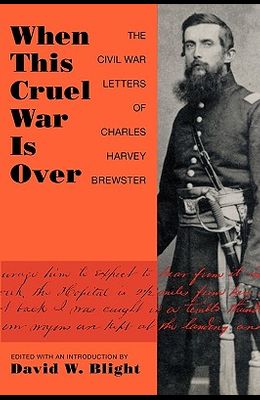 When This Cruel War Is Over: The Civil War Letters of Charles Harvey Brewster

I am scared most to death every battle we have, but I don't think you need be afraid of my sneaking away unhurt. Thus wrote Adjutant Charles Harvey Brewster of the 10th Massachusetts to his sister Martha in 1864, in one of over 200 letters he would pen during his four years of service. Born and raised in Northampton, Massachusetts, Brewster was a twenty-seven-year-old store clerk when he enlisted in Company C of the 10th Massachusetts Volunteers in April 1861. During the next three and a half years he fought in many of the major battles of the Virginia campaigns--Fair Oaks, the Seven Days, Chancellorsville, Gettysburg, the Wilderness, the Bloody Angle at Spotsylvania--rising through the ranks to become second lieutenant and later adjutant of his regiment. His letters, most of which were written to his mother and two sisters, record not only the horrors he witnessed on the battlefield, but also his inner struggle with his own values, convictions, and sense of manhood. In a thoughtful and illuminating introductory essay, David W. Blight explores the evolution of Brewster's understanding of the terrible conflict in which he was engaged. Blight shows how Brewster's attitudes toward race and slavery gradually changed, in part as a result of his contact with escaped slaves and his experience recruiting black troops. He also examines the shift in Brewster's conception of courage, as the realities of war collided with the romantic ideals he had previously embraced. This recently discovered and exceptionally literate collection of 137 letters chronicles the experiences of an ordinary Union soldier caught up in extraordinary events. At times naive and sentimental, at times mature and realistic, Brewster's correspondence not only provides remarkable insight into the meaning of the Civil War for the average Yankee, but also testifies to the persistent power of war to attract and repel the human imagination.