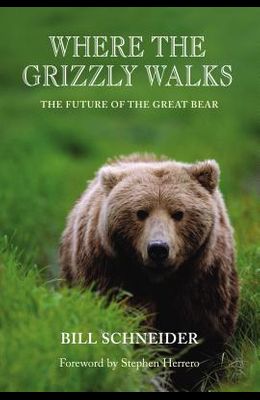 Where the Grizzly Walks: The Future of the Great Bear

An environmental history of the grizzly bear in the American West and the continuing evolution of public policy and public perception of the Great Bear. Maps.

From the Back Cover Admired for its majesty and often feared for its strength, speed, and supposed aggressiveness, the grizzly bear was once unchallenged as the great apex predator of the American West. By the 1970s, however, hunting and habitat loss had reduced its numbers in the lower 48 states to a mere 1000 animals occupying just 2 percent of the bear's former range. Where the Grizzly Walks: The Future of the Great Bear assesses the grizzly's current status and its uncertain prospects at the beginning of the twenty-first century. Providing a future for the grizzly bear is a huge endeavor. As the bear's only enemy (except for bigger bears), man relentlessly continues to penetrate every corner of the last wild places. The traditional wilderness home of the grizzly is now at or near carrying capacity, and the bear population is expanding into rural communities and nontraditional habitat where there have been no grizzlies for decades. It's a setup for conflict. Many bear books have sections advocating the preservation of the grizzly, but no other book devotes all its pages to how we can save the great bear from modern civilization.