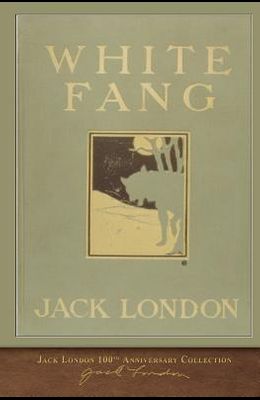 Jack London books by SeaWolf Press were selected for sale by the Jack London Museum. A beautfiul version with the first edition cover and original illustrations. This edition is part of the 100th Anniversary Collection honoring the 100th anniversary of Jack London's death in 1916. In his short 20-year career, he produced more than 50 books. The text and illustrations in this collection are taken from his early publications and the covers are replicas of the first edition covers. Fonts common 100 years ago are used--Century for the text and Bembo on the cover. The book's original format is matched as much as possible. Set during the Klondike Gold Rush in the Yukon Territory, London's 1906 story chronicles the story of a half-dog, half-wolf beast in the wild. As opposed to his famous Call of the Wild tale of a domestic dog reverting to the wild, White Fang depicts a wild animal eventually becoming domesticated. It is a gripping tale told from the wolf's point of view about the hard life in the frozen wilds of the north. The story concludes with White Fang returning to civilization.