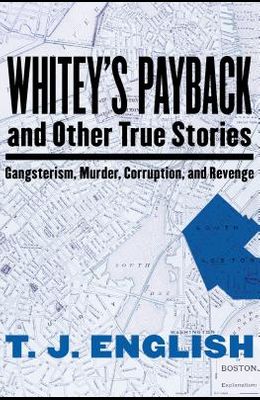 Whitey's Payback: And Other True Stories of Gangsterism, Murder, Corruption, and Revenge

Sixteen stories of true crime from America's foremost authority on the underworld James Whitey Bulger is the last of the old-fashioned gangsters. As a polished, sophisticated psychopath-who also happened to be a secret FBI informant-his reign of power in Boston lasted for more than twenty years. When he went on the lam in 1995, the kingpin's legend grew to rival that of Al Capone. Captured after sixteen years in hiding, he now sits in a maximum security prison awaiting trial on racketeering charges and nineteen counts of murder. T. J. English has been writing about men like Bulger for more than two decades. And this collection, culled from his career in journalism and supported by new material, shows English at his best. In addition to the numerous pieces about Whitey, he reports stories about gangsters and organized crime from New York City to Jamaica to Hong Kong and Mexico. Be they about old school mobsters, corrupt federal agents, or modern-day narcotraficantes wreaking havoc on the US-Mexico border, English tells these stories with depth and insight. Combining first-rate reporting and the storytelling technique of a novelist, English takes his readers on a bloody but fascinating journey to the dark side of the American Dream. As a journalist and nonfiction author, Thomas Joseph T. J. English (b. 1957) is one of America's foremost authorities on the recent history of crime. Born in Tacoma, Washington, he moved to New York in 1981, where he spent his nights driving a taxi and his days writing for Irish America magazine, producing a series of articles that would lead to his first book, The Westies (1990), an account of the last decades of a once-powerful Irish mob. Since then English has written about Vietnamese gangs, mafia infiltration of pre-Castro Cuba, and, in Savage City (2011), the history of racial tension between New York City's police and the Black Power Movement. He has written magazine articles on modern crime for Playboy, Esquire, and New York magazine, and has also written for the screen, producing episodes for the gritty cop shows NYPD Blue and Homicide: Life on the Street. He lives in New York City.