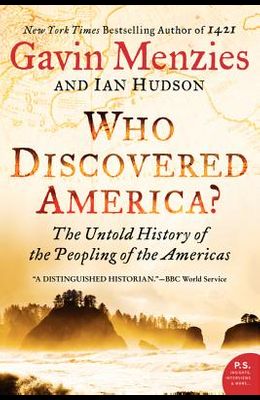 Who Discovered America?: The Untold History of the Peopling of the Americas

by
Gavin Menzies and Ian Hudson

Greatly expanding on his blockbuster 1421 , distinguished historian Gavin Menzies uncovers the complete untold history of how mankind came to the Americas--offering new revelations and a radical rethinking of the accepted historical record in Who Discovered America? The iconoclastic historian's magnum opus, Who Discovered America? calls into question our understanding of how the American continents were settled, shedding new light on the well-known discoveries of European explorers, including Christopher Columbus. In Who Discovered America? he combines meticulous research and an adventurer's spirit to reveal astounding new evidence of an ancient Asian seagoing tradition--most notably the Chinese--that dates as far back as 130,000 years ago. Menzies offers a revolutionary new alternative to the Beringia theory of how humans crossed a land bridge connecting Asia and North America during the last Ice Age, and provides a wealth of staggering claims, that hold fascinating and astonishing implications for the history of mankind.

From the Back Cover Updated with astonishing new findings A groundbreaking history that upends our understanding of ancient America From Gavin Menzies, the author of the blockbuster New York Times bestseller 1421 , comes a revolutionary new account of how the first humans came to North and South America. Menzies reveals that ancient peoples used the oceans' natural currents and prevailing winds to make voyages across both the Atlantic and Pacific. What's more, we now must accept that they had time to develop remarkably advanced cultures. Armed with cutting-edge DNA evidence, newly unearthed artifacts, and astonishing linguistic and archaeological discoveries, Menzies shows: humans have been making transoceanic voyages as far back as 100,000 years ago, vastly predating the supposed overland migration to the Americas during the last Ice Age; the ancient South American civilizations of the Olmec and Maya in Central and South America may have had direct origins and influences from Asia; ancient maps held in the Library of Congress in Washington, D.C., show there must have been sustained and dedicated voyages to the Western Hemisphere by Chinese explorers as early as 2200 b.c.; huge Chinese settlements occupied (and made exploratory journeys from) Nova Scotia; Japanese, Korean, and European voyages predated the explorations currently recorded by history. A maverick scholar, Menzies has made a riveting new contribution to the story of humanity's earliest explorers, revealing the truth behind one of history's most fascinating questions: Who discovered America?