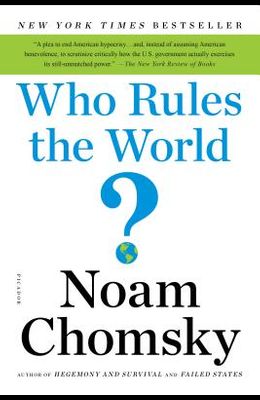 Who Rules the World?

A New York Times Bestseller With a New Afterword In an incisive, thorough analysis of the current international situation, Noam Chomsky examines the way that the United States, despite the rise of Europe and Asia, still largely sets the terms of global discourse. Drawing on a wide range of examples, from the sordid history of U.S. involvement with Cuba to the sanctions on Iran, he details how America's rhetoric of freedom and human rights so often diverges from its actions. He delves deep into the conflicts in Iraq, Afghanistan, and Israel-Palestine, providing unexpected and nuanced insights into the workings of imperial power on our increasingly chaotic planet. And, in a new afterword, he addresses the election of Donald Trump and what it shows about American society. Fierce, unsparing, and meticulously documented, Who Rules the World? delivers the indispensable understanding of the central issues of our time that we have come to expect from Chomsky. An American Empire Project