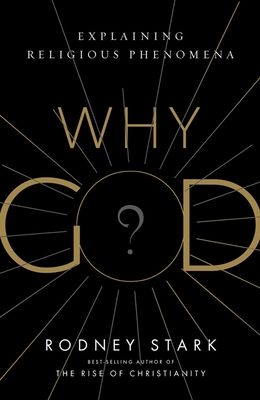 Why is it that the majority of people, from all socio-economic, education, and ethnic backgrounds, ascribe to some sort of faith? What draws us to religion? What pushes us away? And what exactly is religion anyway? Defining religion over the past century has, ironically, led to theories that exclude belief in God, proposing that all systems of thought concerning the meaning of life are religions. Of course, this makes it impossible to distinguish the village priest from the village atheist, or Communism from Catholicism. Worse yet, it makes all religious behavior irrational, presuming that, for example, people knowingly pray to an empty sky. Renowned sociologist of religion Rodney Stark offers a comprehensive, decisive, God-centered theory of religion in his book, Why God: Explaining Religious Phenomena. While his intent is not to insist that God exists, Stark limits religions to systems of thought based on belief in supernatural beings--to Gods. With this God-focused theory, Stark explores the entire range of religious topics, including the rise of monotheism, the discovery of sin, causes of religious hostility and conflict, and the role of revelations. Each chapter of Why God? builds a comprehensive framework, starting with the foundations of human motivations and ending with an explanation of why most people are religious. Stark ultimately settles what religion is, what it does, and why it is a universal feature of human societies. Why God? is a much needed guide for anyone who wants a thorough understanding of religion and our relationship to it, as well as a firm refutation to those who think religion can exist without the divine.