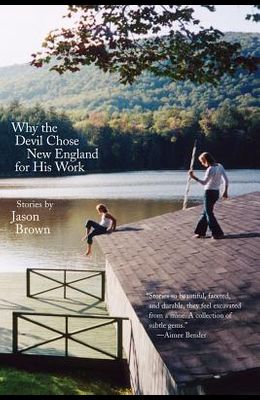 Why the Devil Chose New England for His Work: Stories

Everything Natalie said seemed, to herself, to have been said better by him. He was less fond of speaking, however, than he was of hitting people in the face, which seemed a more likely source of her love to those of us who knew him, begins Jason Brown s linked collection of beautifully haunted, violent, and wry stories set in the densely forested lands of northern New England. In these tales of forbidden love, runaway children, patrimony, alcohol, class, inheritance, and survival, Brown s elegant prose emits both quiet despair and a poignant sense of hope and redemption. These vivid accounts of troubled lives combine the powerful family drama of Andre Dubus and Russell Banks, the dark wit of Denis Johnson, the lost souls of Charles D Ambrosio, and the New England gothic of Nathaniel Hawthorne. Jason Brown s exquisitely crafted second collection will establish him as one of the most important voices in American short fiction.

Books similiar to Why the Devil Chose New England for His Work: Stories

List of All Editions of Why the Devil Chose New England for His Work: Stories