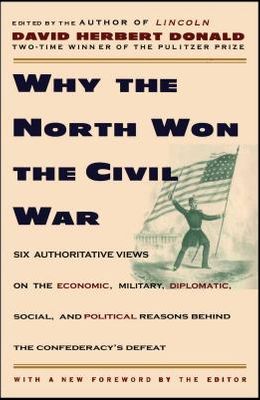 Why the North Won the Civil War

In these compelling essays, six of America's most distinguished historians explore the crucial factors that contributed to the collapse of the Confederacy. The editor is the Pulitzer Prize-winning author of Lincoln.

From the Back Cover Focusing on the political, military, economic, social, and diplomatic reasons behind the Union victory, this collection presents the most complete picture of this key aspect of Civil War studies. In an essay new to this edition, Henry Steele Commager offers a historiographical overview of the collapse of the Confederacy. Richard N. Current describes the economic superiority of the North and shows how the civilian resources of the South were dissipated during the war. T. Harry Williams examines the deficiencies of the Southern military strategy and leadership. Norman A. Graebner discusses the reluctance of France and England to aid the South. David Herbert Donald, in his own essay, reports that excessive Southern emphasis on individual freedom fatally undermined military discipline. And David M. Potter suggests that a lack of political leadership in the South resulted in gross incompetence. And exclusively for this edition, the editor has written a new foreword and completely updated the bibliography to create the most comprehensive and enlightening guide to understanding this fascinating issue.