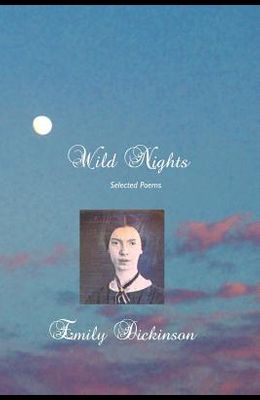 EMILY DICKINSON: WILD NIGHTS: SELECTED POEMS selected and introduced by Miriam Chalk One of the most extraordinary poets of any era, American poetess Emily Dickinson wrote a huge amount of poetry (nearly 1800 poems). This book ranges from her early work to the late pieces, and features many of Dickinson's most famous pieces. This new edition includes many new poems. Emily Elizabeth Dickinson (December 10, 1830 - May 15, 1886) was born in Amherst, MA. Much of her later life was led in privacy, in the family home in Massachusetts. For some, she was a recluse, famous among locals for wearing white clothes, seldom travelled, preferred correspondence to meeting people in the &#64258;esh, and was known for talking to visitors thru a door. She wrote nearly 1800 poems, but only a few were published during her lifetime. The poetry of Emily Dickinson is among the strangest, the most compelling and the most direct in world literature. There is nothing else quite like it. Dickinson writes in short lyrics, often just eight lines long, often in regular quatrains, but often in irregular lines consisting of two half-lines joined in the middle by a dash (such as: ''Tis Honour - though I die' in Had I presumed to hope). Her subjects appear to be the traditional ones of poetry, blocked in with capital letters: God, Love, Hope, Time, Death, Nature, the Sea, the Sun, the World, Childhood, the Past, History, and so on. Yet what exactly is Dickinson discussing? Who is the 'I', the 'Thee', the 'we' and the 'you' in her poetry? This is where things become much more ambiguous. Dickinson is very clear at times in her poetry, until one considers deeper exactly what she is saying - but this ambiguity is one of the hallmarks and the delights of her art. Includes an Introduction, bibliography, notes. ISBN 9781861713636. www.crmoon.com

0
|   0  reviews
Did you read Wild Nights: Selected Poems? Please provide your feedback and rating to help other readers.
Write Review

List of All Editions of Wild Nights: Selected Poems