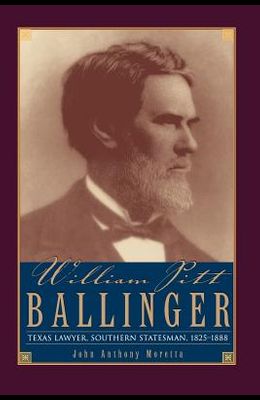 Few people have played a more important role in the history of Texas than William Pitt Ballinger. Though not as well known as legendary figures Stephen F. Austin or Sam Houston, Ballinger is one of those individuals whose behind-the-scenes life had a major impact on the events of his time. This thoroughly researched and engagingly written biography brings Ballinger to life as one of the most complete men of his time: lawyer, soldier, public servant, civic leader, author, editorialist, naturalist, education reformer, and bibliophile. In his long and illustrious career as a lawyer, Ballinger was usually the picture of calm and confidence, but on the morning of April 21, 1881, he found it difficult to maintain his composure as he awaited a conference with Jay Gould, the legendary robber baron of the Gilded Age, who had written Ballinger just six days earlier to obtain the best legal advice I can. After four hours of consultation, Gould left Ballinger's office with the legal opinion he sought and a bill for $2,500. Gould was looking for a lawyer with great ability and nerve, and he later remarked dryly that Ballinger's insightful opinion convinced him of his ability, and that the size of the bill convinced him that Ballinger had the nerve. Jay Gould was just one of the many significant figures who befriended or worked with Ballinger: Daniel Webster, William Seward, Albert Sidney Johnston, Jefferson Davis, Samuel Colgate, and William Tecumseh Sherman, to name but a few. Within Texas, Ballinger's list of friends and acquaintances read like a Who's Who of the mid-nineteenth century: Sam Houston, Michel Menard, Samuel May Williams, William Marsh Rice, and Francis Lubbock, among others. His brothers-in-law, Guy Bryan and Supreme Court Justice Samuel Miller, were both instrumental in getting Ballinger nominated to the Texas Supreme Court and to the Supreme Court of the United States. The reserved Ballinger declined both opportunities. Ballinger served Texas in a number of areas, from helping make Galveston the state's premier antebellum city to devoting his service to the Confederacy (although he had been a staunch Unionist). After the war, he helped negotiate Texas' surrender and played a key role in the drafting of the state's 1876 constitution. But Ballinger's life was not just about the law; it was about living life to the fullest. He was an intense, driven man, devoted to his family, his law practice, his nation, and his beloved state. In Ballinger's fascinating life and career we see reflected some of the most important issues of his era, including secession, slavery, corporations, and the law. The social, political, and cultural climate of Texas, the South, and the nation are revealed through the life, eyes, and mind of this remarkable, articulate man whose life spanned much of the nineteenth century.