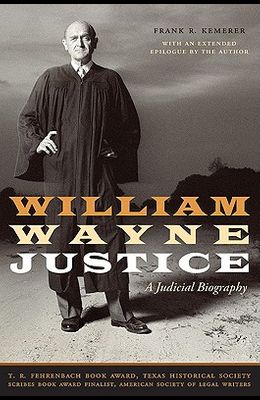 In his forty years on the federal bench in Texas, William Wayne Justice has been a formidable force for change. His rulings have prompted significant institutional reforms in education, prisons, and racial relations, to name only a few areas of society in Texas and beyond that have been affected by Justice's work. For his labors, Judge Justice has received numerous awards, including the Outstanding Federal Trial Judge Award, the Thurgood Marshall Award from the Section on Individual Rights and Responsibilities of the American Bar Association, and the Morris Dees Justice Award from the University of Alabama School of Law. This paperback reprint of William Wayne Justice chronicles his judicial career and the decisions he reached. It includes a new epilogue that describes Justice's move to Austin as a judge on senior status yet with a full caseload, tracks the long-running institutional reform cases to their conclusion, and examines the legacy of this remarkable and controversial jurist.

From the Back Cover Recent congressional battles over judicial appointments underscore an undeniable fact: judges, no less than legislators, can be public policymakers. William Wayne Justice has readily accepted this role, liberally interpreting the Constitution to meet the changing needs of society. As U.S. District Judge for the Eastern District of Texas, he has issued landmark reform decisions significantly affecting public institutions in Texas and across the nation. In this judicial biography, Frank Kemerer explores the factors that led to those decisions and made Justice one of the most controversial judges on the federal bench. Kemerer begins his study with Justice's formative years in the East Texas town of Athens. He follows Justice's entry into the legal profession, his brief involvement in politics, and his appointment as U.S. Attorney for the Eastern District of Texas in 1961. More than half of the book is devoted to the cases decided by Judge Justice since his appointment to the federal bench in 1968. In addition, numerous influential decisions involving the First Amendment, voter discrimination, bilingual education, employment, and rights of the accused are included. Professor Kemerer presents the background of each case, followed by Justice's decision, reactions to it, and an assessment of the decision's impact. Interviewed over four years, Judge Justice speaks candidly about his life, his decisions, and his years on the bench. Kemerer enriches the discussion with insights gleaned from more than one hundred interviews with Justice's law clerks, court officials, plaintiffs, defendants, and others.