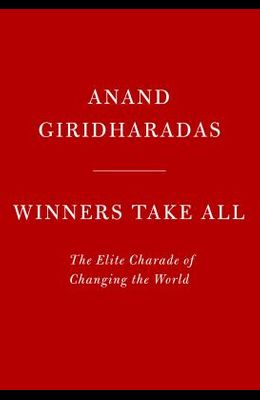 Winners Take All: The Elite Charade of Changing the World

An insider's incisive and eye-opening account of the hypocrisies lurking behind the global elite's efforts to change the world through philanthropy and free enterprise without confronting their role in creating and perpetuating the very problems they purport to solve. Anand Giridharadas paints a hugely revealing picture of how the cosmopolitan global elite has co-opted the idea of changing the world: reframing social problems as market problems; lavishly rewarding thought leaders who peddle winner-friendly theories of progress; and asking always how to do more good but never how to do less harm. Giridharadas hears the limousine confessions of a major charity's executive, tangles with a former American president about his plutocratic hangers-on, and attends a cruise-ship conference where entrepreneurs celebrate their own self-interested magnanimity. He poses difficult, urgent questions: Should the world's gravest problems be solved by unelected elites rather than the public institutions they flout with lobbying and tax loopholes? What does it mean to give millions away if those millions--actually billions--were made selling OxyContin, the drug of choice of the opioid epidemic? And he speaks truth to power: Only by tackling problems through democracy rather than charity with strings attached can we begin to truly change the world. A call to action for both elites and everyday citizens.