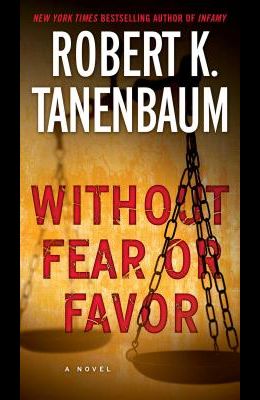 Without Fear or Favor, Volume 29

Book #29 in the Butch Karp Series
by
Robert K Tanenbaum

The best fictional prosecuting attorney in literature (Mark Lane, #1 New York Times bestselling author) Butch Karp returns in this white-knuckled and timely thriller about a radical organization of armed militants bent on the cold-blooded murder of uniformed on-duty police officers. Tensions have been building between the police force and the black rights activists in Harlem, and they reach a boiling point when a cop shoots down a seemingly unarmed teenager. The community, believing the teen had no weapon, rises up in anger and demands to have the officer prosecuted to the fullest extent of the law. But there's something more than a call for justice at work here: a plot to bring down the city's police force through a conspiracy so vast and malicious only N.Y.D.A Roger Butch Karp and his band of truth-seekers can untangle it. Karp, along with Marlene and an eclectic cast of characters, seek to unravel the murder mystery without fear or favor. The prosecution of this heinous crime will be Karp's greatest confrontation with the forces of evil yet. With more than fifteen million copies of his books in print, Robert K. Tanenbaum is a true master of the legal thriller (Vincent Bugliosi) whose straight-from-the-headlines adventures keep you rapt until each stunning and postively balletic ( Booklist ) conclusion.