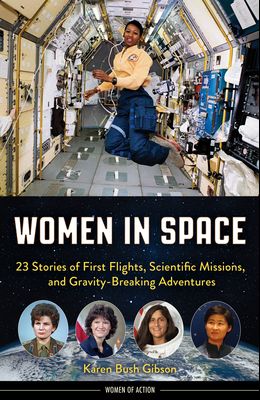 Part of the Women of Action Series
by
Karen Bush Gibson
$12.99
Select Format

When Valentina Tereshkova blasted off aboard Vostok 6 on June 16, 1963, she became the first woman to rocket into space. It would be nineteen years before another woman got a chance--cosmonaut Svetlana Savitskaya in 1982--followed by American astronaut Sally Ride a year later. By breaking the stratospheric ceiling, these women forged a path for many female astronauts, cosmonauts, and mission specialists to follow. Women in Space profiles twenty-three pioneers from around the world, including Eileen Collins, the first woman to command the space shuttle; Peggy Whitson, who orbited aboard the International Space Station for more than a year; and Mae Jemison, the first African American woman in space. Their story, and the stories of the pilots, physicists, and doctors who followed them, demonstrate the vital role women have played in the quest for scientific understanding.

Women of Action Series In Order - By Karen Bush Gibson

List of All Editions of Women in Space: 23 Stories of First Flights, Scientific Missions, and Gravity-Breaking Adventures