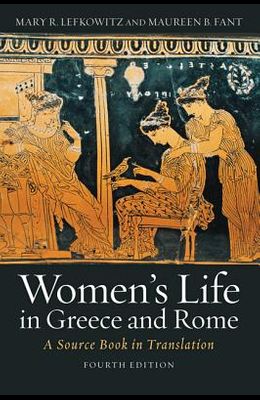 Women's Life in Greece and Rome: A Source Book in Translation

by
Mary R Lefkowitz and Maureen B Fant
$25.18
Select Format

Now in its fourth edition, this highly acclaimed sourcebook examines the public and private lives and legal status of Greek and Roman women. The texts represent women of all social classes, from public figures remembered for their deeds (or misdeeds), to priestesses, poets, and intellectuals, to working women, such as musicians, wet nurses, and prostitutes, to homemakers. The editors have selected texts from hard-to-find sources, such as inscriptions, papyri, and medical treatises, many of which have not previously been translated into English. The resulting compilation is both an invaluable aid to research and a clear guide through this complex subject. Building on the third edition's appendix of updates, the fourth adds many new and unusual texts and images, as well as such student-friendly features as a map and chapter overviews. Many notes and explanations have been revised with the non-classicist in mind.

Books similiar to Women's Life in Greece and Rome: A Source Book in Translation

List of All Editions of Women's Life in Greece and Rome: A Source Book in Translation