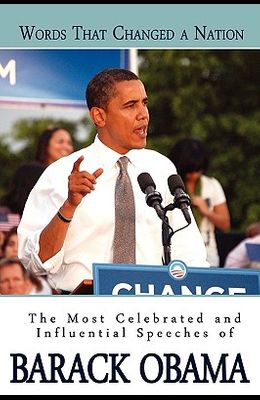 Words That Changed a Nation: The Most Celebrated and Influential Speeches of Barack Obama

If there is anyone out there who still doubts that America is a place where all things are possible, who still wonders if the dream of our founders is alive in our time, who still questions the power of our democracy tonight is your answer. Barack Obama Words That Changed a Nation is a concise collection of the eleven most significant speeches of Barack Obama the words that defined his campaign, the words that made history, the words that inspired a nation: The Audacity of Hope (DNC Keynote) Take Back America Announcement for Candidacy Yes We Can (South Carolina Victory Speech) A More Perfect Union (famous speech on race) Final Primary Night: Presumptive Nominee Speech A World That Stands as One (famous speech in Berlin) The American Promise (DNC acceptance speech) Election Night Victory Speech The Inaugural Address 2009 Economic Address Also included is a brief selection of public declarations on the death of Rosa Parks, the loss of Habeas Corpus, his Father s Day address, and his official 2002 Senate floor statement against the invasion of Iraq.