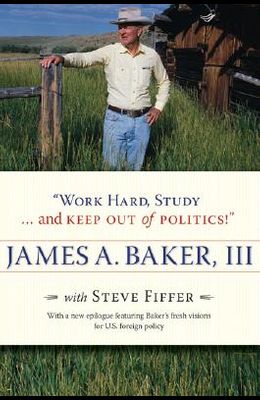 by
James Baker and Steve Fiffer

White House chief of staff twice over, former secretary of state, past secretary of the treasury, and campaign leader for three different candidates in five successful campaigns--few people have lived and breathed politics as deeply or for as long as James Baker. Now, with candor, down-home Texas storytelling, and more than a few surprises, Baker opens up about his thirty-five years behind the scenes. Beginning in 1975 with the Ford administration, in a job procured for him by friend and tennis partner George H. W. Bush, Baker was in the thick of American politics. He recounts the inside story of Ford's rejection of Reagan as a running mate in 1976 with the same insight he has into Reagan's rejection of Ford four years later. When the White House was plunged into turmoil after the Reagan assassination attempt, he was there, and his stories take readers deeper into those chaotic days. Baker was on hand for the George H. W. Bush campaign's battle over running mate Dan Quayle and, more recently, he was again on the front row as George W. Bush fought it out in Florida. Spellbinding and frank, his stories are the ones between the lines of our history books. In this new edition, Baker also responds for the first time in print to the George W. Bush administration's reaction to the Iraq Study Group Report, written with his input. Baker is very qualified to comment on the political operation of the current administration, and his new writing for this paperback brings the full weight of his experience to bear.