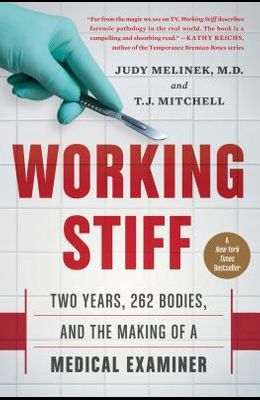 Working Stiff: Two Years, 262 Bodies, and the Making of a Medical Examiner

Fun...and full of smart science. Fans of CSI--the real kind--will want to read it ( The Washington Post ): A young forensic pathologist's rookie season as a NYC medical examiner, and the hair-raising cases that shaped her as a physician and human being. Just two months before the September 11 terrorist attacks, Dr. Judy Melinek began her training as a New York City forensic pathologist. While her husband and their toddler held down the home front, Judy threw herself into the fascinating world of death investigation--performing autopsies, investigating death scenes, counseling grieving relatives. Working Stiff chronicles Judy's two years of training, taking readers behind the police tape of some of the most harrowing deaths in the Big Apple, including a firsthand account of the events of September 11, the subsequent anthrax bio-terrorism attack, and the disastrous crash of American Airlines Flight 587. An unvarnished portrait of the daily life of medical examiners--complete with grisly anecdotes, chilling crime scenes, and a welcome dose of gallows humor-- Working Stiff offers a glimpse into the daily life of one of America's most arduous professions, and the unexpected challenges of shuttling between the domains of the living and the dead. The body never lies--and through the murders, accidents, and suicides that land on her table, Dr. Melinek lays bare the truth behind the glamorized depictions of autopsy work on television to reveal the secret story of the real morgue. Haunting and illuminating...the stories from her average workdays...transfix the reader with their demonstration that medical science can diagnose and console long after the heartbeat stops ( The New York Times ).