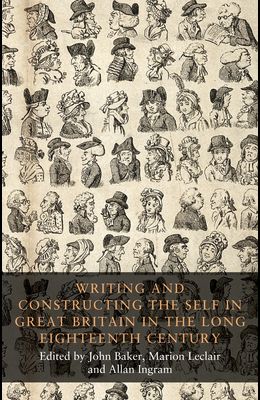 by
John Baker and Marion LeClair and Allan Ingram

This volume explores the various ways the 'self' was perceived, fashioned and written in the course of the long eighteenth century in Great Britain. Following a chronological narrative which highlights the problematic and intriguing nature of what we call the 'self' across time and from different perspectives, this book illustrates the diversity of vision, and the abiding unity of the subject, while foregrounding the emergence of a recognisably modern, individualistic, 'sustainable' self. This collection assembles contributions from both established and emerging researchers from Britain, Europe and the United States. The studies explore the interface between literature and philosophy, and include discussion of philosophers and thinkers such as Locke, Shaftesbury, Mandeville, Hutcheson and Hume; churchmen such as Isaac Barrow and John Tillotson; the novelists Eliza Haywood, Samuel Richardson and Laurence Sterne; the poets Anne Killigrew, Alexander Pope, William Blake and William Wordsworth; and the writers and sometime diarists Samuel Johnson and James Boswell. The twelve essays are preceded by an introduction that frames the problematic history of the notion of the 'self'. With its interdisciplinary scope, Writing and constructing the self in Great Britain in the long eighteenth century will appeal to a wide readership. It will prove invaluable to Literature and Humanities researchers and students at all levels, particularly those interested in the Enlightenment period, as well as anybody interested in questions of identity and consciousness, and their formulation in the past and present.