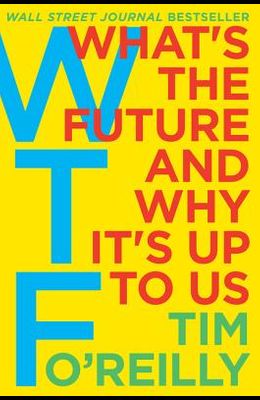 WTF?: What's the Future and Why It's Up to Us

WTF? can be an expression of amazement or an expression of dismay. In today's economy, we have far too much dismay along with our amazement, and technology bears some of the blame. In this combination of memoir, business strategy guide, and call to action, Tim O'Reilly, Silicon Valley's leading intellectual and the founder of O'Reilly Media, explores the upside and the potential downsides of today's WTF? technologies. What is the future when an increasing number of jobs can be performed by intelligent machines instead of people, or done only by people in partnership with those machines? What happens to our consumer based societies--to workers and to the companies that depend on their purchasing power? Is income inequality and unemployment an inevitable consequence of technological advancement, or are there paths to a better future? What will happen to business when technology-enabled networks and marketplaces are better at deploying talent than traditional companies? How should companies organize themselves to take advantage of these new tools? What's the future of education when on-demand learning outperforms traditional institutions? How can individuals continue to adapt and retrain? Will the fundamental social safety nets of the developed world survive the transition, and if not, what will replace them? O'Reilly is the man who can really can make a whole industry happen, according to Eric Schmidt, Executive Chairman of Alphabet (Google.) His genius over the past four decades has been to identify and to help shape our response to emerging technologies with world shaking potential--the World Wide Web, Open Source Software, Web 2.0, Open Government data, the Maker Movement, Big Data, and now AI. O'Reilly shares the techniques he's used at O'Reilly Media to make sense of and predict past innovation waves and applies those same techniques to provide a framework for thinking about how today's world-spanning platforms and networks, on-demand services, and artificial intelligence are changing the nature of business, education, government, financial markets, and the economy as a whole. He provides tools for understanding how all the parts of modern digital businesses work together to create marketplace advantage and customer value, and why ultimately, they cannot succeed unless their ecosystem succeeds along with them. The core of the book's call to action is an exhortation to businesses to DO MORE with technology rather than just using it to cut costs and enrich their shareholders. Robots are going to take our jobs, they say. O'Reilly replies, Only if that's what we ask them to do Technology is the solution to human problems, and we won't run out of work till we run out of problems. Entrepreneurs need to set their sights on how they can use big data, sensors, and AI to create amazing human experiences and the economy of the future, making us all richer in the same way the tools of the first industrial revolution did. Yes, technology can eliminate labor and make things cheaper, but at its best, we use it to do things that were previously unimaginable What is our poverty of imagination? What are the entrepreneurial leaps that will allow us to use the technology of today to build a better future, not just a more efficient one? Whether technology brings the WTF? of wonder or the WTF? of dismay isn't inevitable. It's up to us

From the Back Cover WHAT DO SELF-DRIVING CARS, ON-DEMAND SERVICES, ARTIFICIAL INTELLIGENCE, AND INCOME INEQUALITY HAVE IN COMMON? THEY ARE TELLING US, LOUD AND CLEAR, THAT WE ARE HEADING PELL-MELL TOWARD A WORLD SHAPED BY TECHNOLOGY IN WAYS THAT WE DON'T UNDERSTAND AND HAVE MANY REASONS TO FEAR. Tim O'Reilly, one of the most prescient observers of emerging technology, dubbed the Oracle of Silicon Valley by Inc. magazine and the trend spotter by Wired , explores the burning question of how to master the technologies we create before they master us. How do we make choices today that will result in a world we want to live in? O'Reilly applies techniques his pioneering company has used to predict and make sense of past innovation waves to provide a framework for thinking about what he calls the WTF technologies of the twenty-first century. How are these technologies changing the nature of business, education, government, financial markets, and the economy as a whole, and how can we shape those changes? In this powerful combination of memoir, business-strategy guide, and rallying cry, O'Reilly draws on lessons from networked platforms, including Amazon, Google, Facebook, Airbnb, Uber, and Lyft, to show how our economy and financial markets have become increasingly managed by algorithms. He believes a world ruled by machines that are hostile to humanity is not a distant possibility, and that the systems we are building today are already shaping that future. O'Reilly makes the case that income inequality, declining upward mobility, and job loss due to technology are all the result of design choices we have made in the algorithms that manage our markets and our companies. Just as Google constantly updates its algorithms in pursuit of relevant search and ad results, and as Facebook wrestles with how to rethink its algorithms for user engagement in response to fake news, O'Reilly believes we must rewrite our economic algorithms if we wish to create a more human-centered future. It's up to all of us, he argues, to ensure that the new technologies that shape tomorrow are cause not for worry, but for wonder.