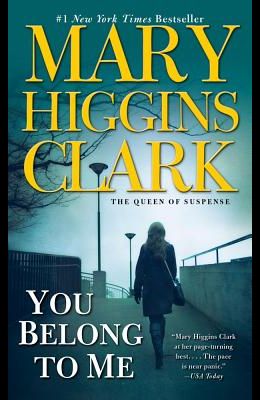 You Belong to Me

Terror heads out to sea when talk-show psychologist Dr. Susan Chandler searches for a killer who stalks vulnerable, single women on cruise ships. But will she become his next victim? Simultaneous release with Clark's new hardcover We'll Meet Again.

From the Back Cover In this breathtaking new novel from the reigning diva of suspense, a psychopathic killer stalks lonely women aboard cruise ships -- giving grisly new significance to the lyrics of an old sweet song... When psychologist Dr. Susan Chandler uses her call-in radio show to explore the issue of lonesome women who disappear and are later found to have been victims of seductive killers, she has no way of knowing she is exposing herself -- and those closest to her -- to the very horror she is warning others against. After a listener calls in offering information about the mysterious disappearance from a luxury ocean liner of wealthy investment advisor Regina Clausen, the caller meets with a terrible accident. Or so say the police. As Susan begins to investigate, she quickly finds herself in a race against time -- and an assassin who targets not only vulnerable women, but anyone who might offer clues to his identity. Inching closer to the truth, Susan makes shocking dual discoveries: that the killer may be an important figure in her own life, and that she herself is marked for murder. As unpredictable as it is daring, YOU BELONG TO ME delivers a series of electrifying jolts as Mary Higgins Clark makes yet another brilliant entry in the annals of classic suspense.