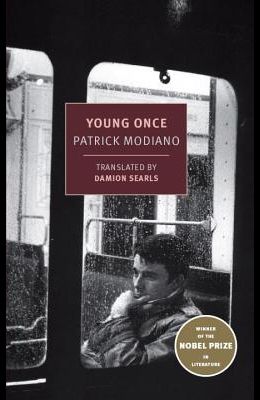 by
Patrick Modiano and Damion Searls

An NYRB Classics Original Winner of the Nobel Prize in Literature Young Once is a crucial book in the career of Nobel laureate Patrick Modiano. It was his breakthrough novel, in which he stripped away the difficulties of his earlier work and found a clear, mysteriously moving voice for his haunting stories of love, nostalgia, and grief. It has also been called the most gripping Modiano book of all ( Der Spiegel ). Odile and Louis are leading a happy, bucolic life with their two children in the French countryside near the Swiss mountains. It is Odile's thirty-fifth birthday, and Louis's thirty-fifth birthday is a few weeks away. Then the story shifts back to their early years: Louis, just freed from his military service and at loose ends, is taken up by a shady character who brings him to Paris to do some work for a friend who manages a garage; Odile, an aspiring singer, is at the mercy of the kindness and unkindness of strangers. In a Paris that is steeped in crime and full of secrets, they find each other and struggle together to create what, looking back, will have been their youth.