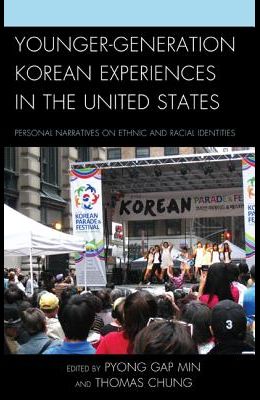 by
Pyong Gap Min and Thomas Chung and Linda Park

Younger-Generation Korean Experiences in the United States: Personal Narratives on Ethnic and Racial Identities compares the formation of the ethnic identities of two distinct cohorts of Korean Americans. Through personal essays, the book explores four influential factors of ethnic identity: retention of ethnic culture; participation in ethnic social networks; links to the mother country and its global power and influence; and experiences with racial prejudice and discrimination. The essays reflect certain major changes between the two cohorts the first growing up in the 1960s and early 1970s and the second growing up during the 1980s and early 1990s and proves how an increase in the Korean population and in the number of ethnic organizations helped the second-cohort Korean Americans retain their cultural heritage in a more voluntary, and therefore meaningful, way. This book s combination of first-hand experiences and critical analysis makes it a valuable resource for studies of ethnicity, culture, identity formation, and the Asian-American experience.