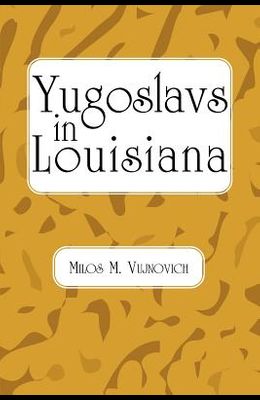 Originally published in celebration of the centennial of the United Slavonian Benevolent Association in 1974, Yugoslavs in Louisiana details the surge of immigration in the 1820s and 1830s, and the influences of the people in the years that followed. Written by a twentieth-century Yugoslav immigrant, this illustrated work documents the story of his Slovenian predecessors in Louisiana and their role in the development of the modern state. The Slavonian community is perhaps best known in Louisiana for its contribution to oyster cultivation, and this book devotes a chapter to the Dalmatian fishermen who later became influential oystermen, restaurateurs, and entrepreneurs. The author traces the journey of the early 1830s, follows their transition into Louisianians and Americans, and describes their religious, social, and political life in the Pelican State. There is also a wealth of biographical and genealogical information on early immigrants, as well as those who followed, right up to the biographies of presidents of the United Slavonian Benevolent Association from 1874-1974. The work is the result of more than 20 years of painstaking research on a subject long overlooked by historians, and was published on the occasion of the 100th anniversary of the founding of the second oldest Yugoslav organization in the Western Hemisphere.