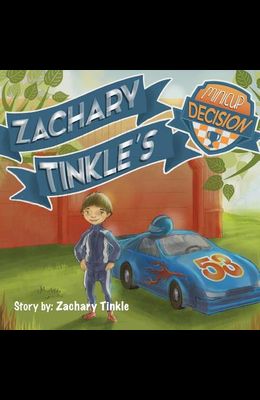 Zachary Tinkle wants to be a NASCAR(R) driver when he grows up, so he's been practicing with go-karts, getting ready for his first time racing outdoors. But when his parents take him to get the autograph of a famous NASCAR(R) driver, he sees something he can't believe: A little NASCAR(R) stock car-just his size. It's a minicup, a half-size stock car that can go 100 miles per hour on the track. Then he meets a father and his young son-who races a mincup Zachary loves go-karts, but he knows a mincup will get him to the NASCAR big leagues. It's time to make a decision, and talk to Mom and Dad... Children and race fans will love this account by Zachary Tinkle, based on his own true-life story and immaculately illustrated by Antonio J. Nunoh Diaz. It's about working hard for your dreams, and the value of thinking through important decisions. About the Author: Zachary Tinkle is a 12-year-old driving sensation based in Park Ridge, IL that currently races the #53 1/2 size stock car mini cup car (also known as super cups) and indoor electric go-karts. He is the 2014 Central States Region (CSR) Rookie of the Year and placed Top 5 in championship points in his rookie season. Tinkle has won a junior gas-powered indoor go-karting championship (Chicago Indoor Racing 2013) and three junior electric indoor go-karting championships (K1 Speed 2014 & 2015). He has family ties to the Indianapolis and Richmond, IN areas and was born in Cincinnati, OH. Zachary has aspirations of racing at the top levels of stock car racing including getting a ride with a NASCAR(R) team.