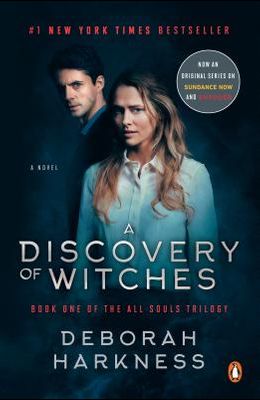 A Discovery of Witches (Movie Tie-In)

Book one of the New York Times-bestselling All Souls trilogy--a wonderfully imaginative grown-up fantasy with all the magic of Harry Potter and Twilight (People).

Now a] hot show that's like Twilight meets Outlander (Thrillist) airing Sundays on AMC and BC America, as well as streaming on Sundance Now and Shudder.

Deborah Harkness's sparkling debut, A Discovery of Witches, brought her into the spotlight and galvanized fans around the world. In this tale of passion and obsession, Diana Bishop, a young scholar and a descendant of witches, discovers a long-lost and enchanted alchemical manuscript, Ashmole 782, deep in Oxford's Bodleian Library. Its reappearance summons a fantastical underworld, which she navigates with her leading man, vampire geneticist Matthew Clairmont. Harkness has created a universe to rival those of Anne Rice, Diana Gabaldon, and Elizabeth Kostova, and she adds a scholar's depth to this riveting tale of magic and suspense. The story continues in book two, Shadow of Night, and concludes with The Book of Life. The story now comes alive in an incredibly lush eponymous TV series, starring Teresa Palmer (I Am Number Four, Hacksaw Ridge) and Matthew Goode (Match Point, The Imitation Game).

Frequently Asked Questions About A Discovery of Witches (Movie Tie-In)

All Souls Trilogy Series In Order - By Deborah Harkness

5
|   1  review
Did you read A Discovery of Witches (Movie Tie-In)? Please provide your feedback and rating to help other readers.
Write Review
1