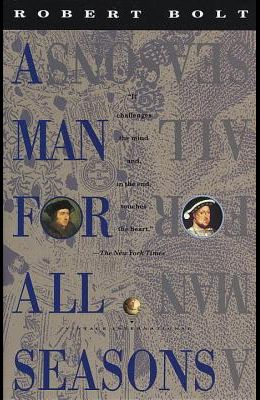 A Man for All Seasons

The classic dramatization of Sir Thomas More's historic conflict with Henry VI--a compelling portrait of a courageous man who died for his convictions.

Sir Thomas More--the brilliant nobleman, lawyer, humanist, author of such works as Utopia--was a long-time friend and favorite of Henry VI, ascending to the position of Lord Chancellor in 1529. Yet he was also a staunch Catholic, and when Henry broke with the Church in 1531 after the Pope had refused to grant him a divorce from Catherine of Aragon, More resigned the Chancellorship. In 1534, Parliament passed a bill requiring all subjects to take an oath acknowledging the supremacy of England's king over all foreign sovereigns--including the Pope. More refused, was imprisoned, and finally was executed in 1535.

An enduring modern classic, A Man for All Seasons challenges the mind, and, in the end, touches the heart (New York Times).

Frequently Asked Questions About A Man for All Seasons

0
|   0  reviews
Did you read A Man for All Seasons? Please provide your feedback and rating to help other readers.
Write Review

List of All Editions of A Man for All Seasons