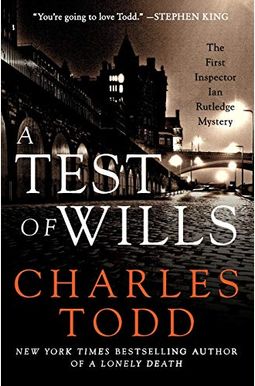 The first novel to feature war-damaged Scotland Yard inspector Ian Rutledge, A Test of Wills is the book that brought author Charles Todd into the spotlight. This Edgar(R) and Anthony Award-nominated, New York Times Notable mystery brilliantly evokes post-World War I Great Britain and introduces readers to one of crime fiction's most compelling series protagonists. Here the shell-shocked Rutledge struggles to retain his fragile grip on sanity while investigating the death of a popular army colonel, murdered, it appears, by a decorated war hero with ties to the Royal Family. A phenomenal writer, a twisting puzzle, a character-rich re-creation of an extraordinary time and place.it all adds up to one exceptional read that will delight fans of Elizabeth George, Martha Grimes, Jacqueline Winspear, Ruth Rendell, and other masters of the British procedural.

Books like A Test Of Wills (Inspector Ian Rutledge Mysteries)

5
|   7  reviews
Did you read A Test Of Wills (Inspector Ian Rutledge Mysteries)? Please provide your feedback and rating to help other readers.
Write Review
1