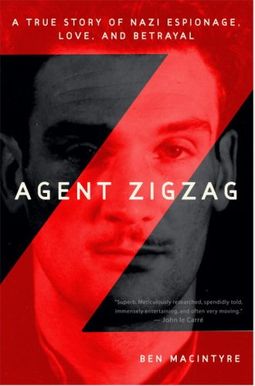 NAMED ONE OF THE TEN BEST BOKS OF THE YEAR BY ENTERTAINMENT WEKLY AND ONE OF THE BEST BOKS OF THE YEAR BY THE NEW YORK TIMES BOK REVIEW AND THE WASHINGTON POST Eddie Chapman was a charming criminal, a con man, and a philanderer. He was also one of the most remarkable double agents Britain has ever produced. In 1941, after training as German spy in occupied France, Chapman was parachuted into Britain with a revolver, a wireless, and a cyanide pill, with orders from the Abwehr to blow up an airplane factory. Instead, he contacted M15, the British Secret service, and for the next four years, Chapman worked as a double agent, a lone British spy at the heart of the German Secret Service. Inside the traitor was a man of loyalty; inside the villain was a hero. The problem for Chapman, his spymasters, and his lovers was to know where one persona ended and the other began. Based on recently declassified files, Agent Zigzag tells Chapman's full story for the first time. It's a gripping tale of loyalty, love, treachery, espionage, and the thin and shifting line between fidelity and betrayal.

Books like Agent Zigzag: A True Story Of Nazi Espionage, Love, And Betrayal

0
|   0  reviews
Did you read Agent Zigzag: A True Story Of Nazi Espionage, Love, And Betrayal? Please provide your feedback and rating to help other readers.
Write Review

List of All Editions of Agent Zigzag: A True Story Of Nazi Espionage, Love, And Betrayal