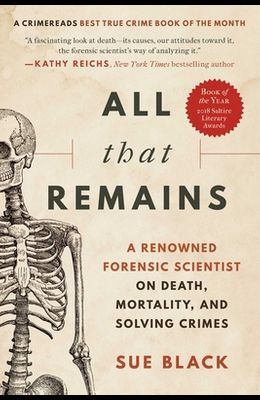 All That Remains: A Renowned Forensic Scientist on Death, Mortality, and Solving Crimes

Book of the Year, Saltire Literary Awards
A CrimeReads Best True Crime Book of the Month

For fans of Caitlin Doughty, Mary Roach, Kathy Reichs, and CSI shows, a renowned forensic scientist on death and mortality. Dame Sue Black is an internationally renowned forensic anthropologist and human anatomist. She has lived her life eye to eye with the Grim Reaper, and she writes vividly about it in this book, which is part primer on the basics of identifying human remains, part frank memoir of a woman whose first paying job as a schoolgirl was to apprentice in a butcher shop, and part no-nonsense but deeply humane introduction to the reality of death in our lives. It is a treat for CSI junkies, murder mystery and thriller readers, and anyone seeking a clear-eyed guide to a subject that touches us all. Cutting through hype, romanticism, and clich , she recounts her first dissection; her own first acquaintance with a loved one's death; the mortal remains in her lab and at burial sites as well as scenes of violence, murder, and criminal dismemberment; and about investigating mass fatalities due to war, accident, or natural disaster, such as the 2004 Indian Ocean tsunami. She uses key cases to reveal how forensic science has developed and what her work has taught her about human nature. Acclaimed by bestselling crime writers and fellow scientists alike, All That Remains is neither sad nor macabre. While Professor Black tells of tragedy, she also infuses her stories with a wicked sense of humor and much common sense.

Frequently Asked Questions About All That Remains: A Renowned Forensic Scientist on Death, Mortality, and Solving Crimes

0
|   0  reviews
Did you read All That Remains: A Renowned Forensic Scientist on Death, Mortality, and Solving Crimes? Please provide your feedback and rating to help other readers.
Write Review

List of All Editions of All That Remains: A Renowned Forensic Scientist on Death, Mortality, and Solving Crimes