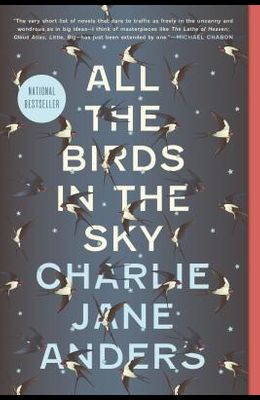 All the Birds in the Sky

The book is full of quirkiness and playful detail.but there's an overwhelming depth and poignancy to its virtuoso ending. --NPR

From the former editor-in-chief of io9.com, a stunning Nebula Award-winning and Hugo-shortlisted novel about the end of the world--and the beginning of our future

An ancient society of witches and a hipster technological startup go to war in order to prevent the world from tearing itself apart. To further complicate things, each of the groups' most promising followers (Patricia, a brilliant witch and Laurence, an engineering wunderkind) may just be in love with each other.

As the battle between magic and science wages in San Francisco against the backdrop of international chaos, Laurence and Patricia are forced to choose sides. But their choices will determine the fate of the planet and all mankind.

In a fashion unique to Charlie Jane Anders, All the Birds in the Sky offers a humorous and, at times, heart-breaking exploration of growing up extraordinary in a world filled with cruelty, scientific ingenuity, and magic.

Frequently Asked Questions About All the Birds in the Sky

0
|   0  reviews
Did you read All the Birds in the Sky? Please provide your feedback and rating to help other readers.
Write Review

List of All Editions of All the Birds in the Sky