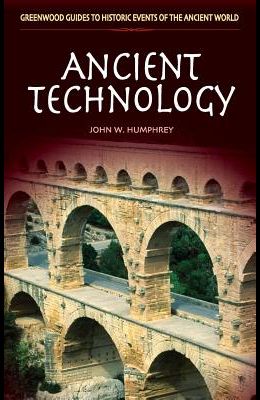 2 Out of 5
We search the most popular review sites and give you one score you can trust!

Since ancient times, technological advances have increased man's chances for survival. From the practicality of a Roman aqueduct to the art of the written word, man has always adapted his environment to meet his needs, and to provide himself with sustenance, comfort, comfort, leisure, a higher quality of living, and a thriving culture. This concise reference source takes a closer look at six technological events that significantly impacted the evolution of civilization, from the Palaeolithic age to the height of the Roman Empire. As he touches on the common elements of ancient technology--energy, machines, mining, metallurgy, ceramics, agriculture, engineering, transportation, and communication--Humphrey asks questions central to understanding the impact of ancient tools on the modern world: What prompts change? What cultural traditions inhibit change? What effect do these changes have on their societies and civilization?

Humphrey explores technologies as both physical tools and as extensions of the human body, beginning with the invention of the Greek alphabet and including such accomplishments as early Neolithic plant cultivation, the invention of coinage, the building of the Parthenon, and Rome's urban water system. Detailed line drawings of tools and machines make ancient mechanics more easily accessible. Primary documents, glossary, biographies, and a timeline dating from the Palaeolithic age to the Roman Empire round out the work, making this an ideal reference source for understanding the tools of the ancient world.

0
|   0  reviews
Did you read Ancient Technology? Please provide your feedback and rating to help other readers.
Write Review