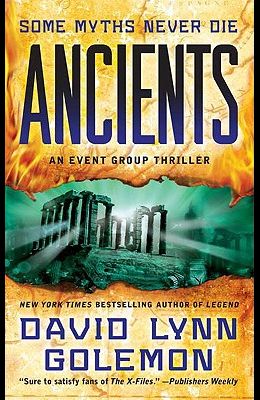 TO SECURE THE FATE OF THE WORLD

Eons before the birth of the Roman Empire, there was a civilization dedicated to the sciences of earth, sea, and sky. In the City of Light lived people who made dark plans to lay waste to their uncivilized neighbors using the very power of the planet itself. As the great science of their time was brought to bear on the invading hordes, hell was set loose on Earth. And the civilization of Atlantis disappeared in a suicidal storm of fire and water.

THE EVENT GROUP MUST UNCOVER THE SECRETS OF THE ANCIENTS

Now history threatens to repeat itself. The great weapon of the Ancients has been discovered in the South Pacific, and it is being deciphered by men of hatred who want to unleash hell on Earth once again. This time, it's up to the Major Jack Collins and the Event Group--comprised of the nation's most brilliant minds in the fields of science, philosophy, and the military to find the truth behind the world's greatest unsolved myths--to end the cycle of destruction. Meanwhile, the seas rise, the earth cracks, and entire cities crumble to dust as the evil plan mapped out thousands of years before begins to take shape.

Golemon [joins] the giants of the genre like Clive Cussler, James Rollins, and Matthew Reilly.--Megalith.com

What should you read after Ancients Book? Here is a list of books to read if you read and loved Ancients

0
|   0  reviews
Did you read Ancients? Please provide your feedback and rating to help other readers.
Write Review