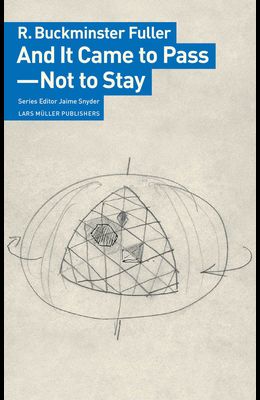 And It Came To Pass--Not To Stay

by
R B Fuller and Jaime Snyder
$20.00
Select Format

Lyrical meditations on life, work and hopes for the future from the beloved architect and polymath Buckminster Fuller

First published in 1976, issued in a new edition in 2008, and now back in print, And It Came to Pass--Not to Stay brings together a selection of Buckminster Fuller's (1895-1983) lyrical and philosophical best, including seven essays that address global crises and his predictions for the future--to make the world work for 100% of humanity in the shortest possible time through spontaneous cooperation without ecological offence or the disadvantage of anyone. These essays, comprising How Little I Know, Complexion 1976, What I Am Trying to Do, A Definition of Evolution, 'And It Came to Pass' (Not to Stay), Soft Revolution and Ethics, pursue the task of ushering in a new era for humanity by always starting with the universe. Each of the texts is written in Fuller's ventilated prose, an essayistic poem form that breaks up his thinking into lines and stanzas.Though best known as a designer and design theorist, Fuller investigated and challenged assumptions about structure, function, materials, technology, aesthetics, services, distribution, mobility, communication, collaboration, information, recycling, politics, property and social norms. These essays present the great range and depth of Fuller's thought while elegantly weaving the personal, the playful, the simple and the profound.

0
|   0  reviews
Did you read And It Came To Pass--Not To Stay? Please provide your feedback and rating to help other readers.
Write Review