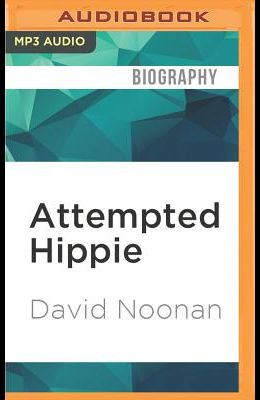 No smartphones, no internet, no internships, no ambition, no plans, no money. Just lots of pot and cheap beer and a half-baked desire to become a hippie. Welcome to the end of the 60's era. In 1972, David Noonan dropped out of college for no good reason, worked nights in a gas station and days in a cemetery, then quit both jobs to hitchhike west and meet up with his brother John, a natural-born rambler and a certified member of the counterculture. Attempted Hippie is Noonan's vivid account of his odyssey from New Jersey to California and back again. It's a funny, un-romanticized tale of a young man with the wrong glasses and the wrong hair searching for himself.and his next ride.

David Noonan is a former Senior Editor at Newsweek and author of the critically acclaimed novel Memoirs of a Caddy. His journalism has been published in Esquire, Sports Illustrated, the New York Times Magazine and other publications. Besides pumping gas, burying people and caddying, he has also worked as a plumber's helper, a dishwasher, a cab driver, a diamond weigher and a roustabout.

0
|   0  reviews
Did you read Attempted Hippie? Please provide your feedback and rating to help other readers.
Write Review